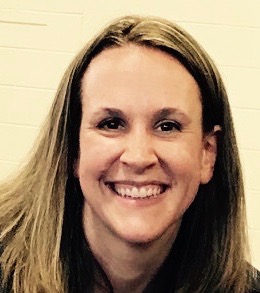 I walk in with my little notebook, ready to sit at my desk and have a little training. But there are no chairs. There’s this “Kumbaya” circle in the middle of the room. And then we start out with some kind of meditation, and I’m thinking: ‘What have we done? What IS this??’

Amanda DeMano, Executive Director for IT Strategic Programs at University of Chicago Medicine, laughs as she remembers when she was first introduced to Women’s Leadership Lab in 2014. A manager on her team had suggested they participate in the six-session Lab and she was game to give it a try.

Years earlier, DeMano had participated in another women’s initiative while working at a large Chicago consulting firm. It left an impression:

I was asked to serve on the committee by one of the firm’s partners who was very politically ‘in play’. So, of course I said: ‘Oh yes, I’d love to do that.’ But I remember telling my friends: ‘I just hate the women’s initiative because the more you highlight the women and all this female power and energy the more you’re pointing out how we’re different. We should just be people.’

She shared this story during that first week of the Lab, sometime after her introduction to the mindful meditation.

I never described myself as a woman able to meditate. I may flirt with yoga, but that’s about as close as I got to mindfulness and practice. And I certainly rebuked any notion of misogyny and feminism. Now looking back, I can imagine them just thinking: ‘I can’t believe she’s saying this!’ I was really a good candidate for them.

Since that first Lab, DeMano just wrapped up her second six-session Lab in June and plans to repeat it every three years. This is the first of a two-part interview that details her journey. (Part Two)

What exactly flipped the switch for you and opened you up to this approach?

From that first day — in our first check-in — I realized I was in a room of really interesting women who were at their own point of inflection, be it career or personal. I, myself, had just come back from maternity leave after giving birth to twins and my life had changed in a very real way.

It was the spirit of all of us; the promise of pursuing these life decision points and applying the women’s leadership voice to our decision-making. I think what made me want to come back the next week was some of the mystery, but mainly the community and connectedness amongst the circle.

Any surprises about working within this ‘Living Lab’?

It was so interesting to me that there was this relational triangle of Rima, Shellie, and Cynthia (WLL co-founders and facilitators).They each overlap, but their experience represents different points of the triangle.  For me:

Cynthia is very business-driven and someone who I might connect with in my professional life. I gravitated toward her immediately.

I probably would never have had an opportunity to meet Rima in my personal or professional life. But I’m glad I did. Her strong empathy made it easy to connect.

And Shellie really pulls on every piece of my scientific, black and white, analytical and reasoning side. I really appreciated bringing that balance of science into the conversation.

The combination of the three of them is just so engaging. That balance is something I just couldn’t pass up. So, when offered a chance to take a new version of the Lab, I said: ‘Yep! Doing that again.’

What was the biggest thing you gained from your first Lab experience?

That first experience — particularly the exercises around projection — left me with such an altered view of life and relationships, both personal and professional.

It was profound enough to change the way I operated every day, and the way I perceived every situation.

What I learned about myself is that I was very quick to judge. I wasn’t honoring the work processes of others. Now, even how I do a performance appraisal is so different. I’ll write it first and then ask myself: ‘What does this say about me?’ Then I’ll go back and really think about that person and find something more meaningful for them.

Also, I find that I have a lot more patience in meetings for other opinions. I’m pretty driven and like to just keep moving forward at any cost. But people who have a different process need to ask questions and I find myself much more patient in team-based situations. I’ll even end up being a negotiator now, which is a new role for me.

I think it’s really helped my business acumen and Emotional Intelligence in the workplace.

Any other big shifts for you as a result of that first Lab?

Yes! I’m much more cognizant of the ‘men v. women’ professional dynamics in my life. For example, the differences between how women and men go after a new role: women tend to first prove their experience while men will often go after it, even if they aren’t fully qualified. Understanding this has made me a little more comfortable speaking up and putting myself out there to have an opinion and be part of the process, even if I have more to learn.

It sounds like you’ve changed your perspective about ‘highlighting’ the differences in women leaders.

It is a complete reversal. Before, I thought women needed homogeneity in how we pursue our leadership. Now, it is painfully clear that there are differences in female and male leadership and those feminine energies need more care and feeding and fostering.

I need to honor those parts of myself to be really authentic in my leadership.

Amanda spoke about her new awareness around the valuable differences in female and male leadership, and how the feminine aspects (in both women AND men) need to be encouraged, recognized and valued.
That is something we practice in every WLLab.

Join us for our next Chicago Women’s Leadership Lab ,
beginning January 11, 2019
Learn more